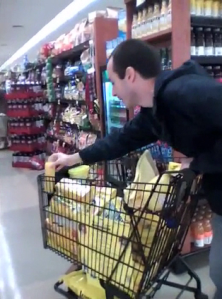 Please be invited to Supermarket Music, an event of covert and overt actions for people in a supermarket, at Bónus, Nýbýlavegur at 16:00 on Friday, 28 October. This event is free and open to anyone who shows up. You are invited to perform any of these pieces (including Aisle Music, Monochromes, and Transcription of guqin tuning for people in a supermarket) – or any of your own. If you would like to post your own supermarket scores for others to perform, please contact me so I can pass them along, or post to our Facebook event page. We will have a preparatory meeting at Salurinn at 15:00, or you are welcome to just show up.

Below is a video of a previous run of these pieces at Ralphs of La Jolla, CA in 2010 – and a little bit about the origins of the project:

This is a collection of scores for people in a supermarket, that began with a meditation on the idea of the 24-hour supermarket as a contemporary form of nature. I had started learning guqin, the ancient Chinese 7-string zither associated with Taoist mythology, in lore played on a mountaintop at midnight as a form of meditation. As a car- less Southern California transplant, I had less easy access to mountains, but Ralphs-La Jolla, with its perpetual fluorescent glow and gently flowing Muzak seemed the closest possible environment for private reflection.

These pieces are a series of undercover actions coexisting with regular supermarket activity, first performed with over 20 participants at Ralphs-La Jolla in February 2010, without explicit permission. When prodded about the activity, a clerk responded, “I don’t know, but as long as they’re shopping, we’re not going to do anything.”

The collection is open and ongoing – new pieces are very much invited.