“…the language of fishes…” – Peter Ablinger

On The Sleeper and the Drinker:

Carolyn Chen’s “The Sleeper and the Drinker” is a small flute concerto, which Dudamel conducted with Denis Bouriakov as soloist, in which sensuality and abstraction find common ground.

Gustavo Dudamel lead the final piece on the program–Carolyn Chen’s delicate, impressionistic The Sleeper and the Drinker. A small, fluttering flute concerto, it brings to vivid life a passage from Rebecca Solnit’s The Faraway Nearby, which depicts moths drinking the tears of sleeping birds.

– Catherine Womack, I Care If You Listen

The Sleeper and the Drinker by Carolyn Chen was by far the most traditional piece on the program, but in many ways the most satisfying for its diversity of instrumental coloration, atmospheric orchestration, and classical references. Scored for 15 players and flute soloist (LA Phil principal, Denis Bouriakov), the piece was conducted by Gustavo Dudamel.

From the opening entrance of the flute, the atmosphere evoked a sense of the mythic and the magical. You’re inevitably reminded of Debussy’s Prelude to the Afternoon of a Faun as the composition meanders through a botanical wonderland, a tangled jungle a la Henri Rousseau.

Along the way the wandering flute encounters a variety of instrumental flora and fauna, including a gamelan influence and the innocent, childlike plinks of a toy piano. Dulcetly conducted by Dudamel, the timid faun transforms, in the end, into a fluttering firebird.

On Signs of Struggle:

We have all heard percussion parts that put us in mind of cannons or hoof beats – but this was much more powerful and vivid even though it was not particularly loud or dramatic. It was as if the physical drama in the first part of the performance prepared our brain to acutely receive the symbolic sounds of the struggle as portrayed by the prepared drum. The choreography of this piece is extensive – Carolyn Chen’s score, performance notes and sketches run to several pages. The physical exertions of the players – Liam Mooney, Erika Bell, Davy Sumner, and John Eagle – were met with extended applause. Signs of Struggle is an enlightening combination of physicality and musical symbolism that surprises the listener with its power of suggestion and stimulation.

On We were dead and we could breathe:

The second half of the story began in a similarly depressing manner with Carolyn Chen’s scant-optimistic “We were dead and we could breathe”, which, inspired by the air smog in Beijing, tackled the issue of fine dust with likewise tonal elements. The work captivated by its orchestration and oscillated acoustically between purity and noise.

On How to Fight:

Constructed somewhat loosely in the manner of a temporal collage, “How to Fight” was able to shift quickly among different aspects of its theme, addressing both the nature of conflict, its successful execution and its avoidance, and not just in human terms. In one segment, Chen and Torrence sat center stage, facing each other, alternating vocal screeches like territorial tropical birds, defending their roosts with their cries… The interplay of delivery, in light and dark, with related and unrelated action, as well as when sung versus spoken, helped keep the attention alive, as did the occasionally surprising transitions between segments, encouraging the audience to not expect the easily predictable… “How to Fight” is an intriguing work that deserves another chance at performance soon, before a larger audience in a different, slightly larger and theatrically-equipped space. 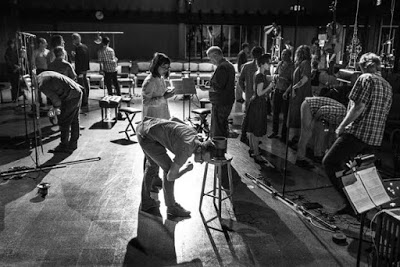 And then, in the middle of that static space, Chen’s new work moved us. Its overlapping lines surge slowly forward in a diaphanous, layered drone that occasionally intensifies into lush, plaintive string gestures, elegant even in their strained intensity. Over and through the strings, prerecorded sounds pipe in. As Chen notes: “I sought out sounds from the local environment, real and fictional rain, ensemble rehearsals, and friends’ explanations of imaginary trees.” In thus weaving local sound-objects into a compelling emotive frame, Chen’s piece knowingly reflects Tudor’s fascination with resonating objects while transposing its materialism into the realm of memory and imagination. With a bit more of the Tudor as a parting reflection, the show revealed its sleight of hand, letting the richly associative mood of Chen’s work linger in Tudor space.

…[T]he piece presents an audience with of a living map for grafting, through emotional and facial steps, leaps, pauses, distractions and fascinations, the terrain of Celibidache’s environment onto the general experience of listening. The performers of Adagio become scores for future listening experiences. This is a model of listening where faces hear and modulate their environment.

On Relationships with Gravity:

MATA-commissioned composer Carolyn Chen asserted herself as the evening’s other standout. A multidisciplinary piece investigating the sensation of falling, Relationships with Gravity (2014) invoked video projections, personal interviews, and the ancient Chinese guqin (a seven-string zither), to forge a gratifying discord often interrupted by Marina Kifferstein’s stunning violin. Perhaps most inventively, Chen and her ensemble interspersed the score with melodies from mundane objects such as pebbles and ping-pong balls—and even dumped popcorn onto the unsuspecting audience. It was satisfyingly cinematic in its sensory overload.

On the woods are miles to sleep to sleep:

Carolyn Chen’s wonderful work for guqin (a Chinese zither) is both detailed and open to the sounds of the field recording provided by Evans.

On Wilder Shores of Love:

The evening’s most consistently alluring piece, though, was Carolyn Chen’s “Wilder Shores of Love,” a quiet but lush meditation inspired, Ms. Chen wrote, “by the sweeping motions of both Cy Twombly’s paintings and the Pacific Ocean.” Ms. Chen captured that sense of motion in steady, almost Impressionistic waves of crescendos and diminuendos (or sometimes just the crescendos), and in an alluringly nebulous harmonic language.

Perhaps most crucially, the work afforded a few moments of relative serenity and unity amid the wildness of the rest of the program.

By far–far!!–the most beguiling work was Carolyn Chen’s bathetically titled Wilder Shores of Love. Ms. Chen’s biography–where she lists her thesis as ‘Free Jazz and Radical Politics’ and one her prime mentors as ‘the ocean’ was bewitching enough But once one forgot the horrible name of the piece, it was a gorgeous picture both of the ocean, and (since it was about the movements of schools of fish), chaos or indeterminate theory.

Nothing, though, was musically indeterminate. The unceasingly dark tones (timpani rolls, double-basses) was subterraneanly pelagic enough. The movements of the instruments past each other were graphic, unexpected, usually soothing. (One or two splashes of chords was hopefully, not a small fish being eaten by a larger fish.) This could have been John Williams Jaws music, but was far too busy for such shenanigans/ Ms. Chen, not yet even 30, has a great future, I feel.